We live surrounded by the ghosts of giants. Mastodons once foraged in Manhattan and trod along the banks of Lake Michigan, where Chicago’s skyscrapers now stand. Bear-sized beaver dammed North American streams; herds of camel and horses roamed the plains. — Sharon Levy

Last October 2010, workers were digging a retention pond, high in the Colorado Rockies, just outside Snowmass Village. The retention pond remains on hold, for what they discovered that day was the greatest Ice Age fossil find in Colorado history. The Denver Museum of Nature and Science, quickly dispatched a “response team” and in the first few weeks of digging, they have uncovered 8-10 mastodons, 4 mammoths, Ice Age deer and bison, and one Jefferson ground sloth. Work will continue this spring, but Colorado is already in the throes of paleo-fever!

(For more on the Snowmass excavation, visit the Denver Museum of Nature & Science website, and take a glimpse at the film clip at the end of this post!).

A newly published book gives the Snowmass finds a special relevance in our climate-challenged age — Sharon Levy’s Once & Future Giants: What Ice Age Extinctions Tell Us About the Fate of Earth’s Largest Animals. Sharon Levy nicely sets the stage for the changes to come:

As Once & Future Giants makes clear, the fate of the mastodon and woolly mammoth may have a lot to tell about our future world — and especially the future lives of polar bears, African elephants, Siberian tigers, and many more of our fellow creatures.

Also pictured above: National Geographic Prehistoric Mammals by Alan Turner — technically a book for young adults, but actually a wonderful pictorial tour of the prehistoric world for readers of all ages.

With the excitement surrounding the historic Snowmass excavation, the Land Library has been dusting off its volumes on the world of prehistoric mammals. What a story they tell!

Twilight of the Mammoths: Ice Age Extinctions and the Rewilding of America by Paul S. Martin, The Fate of the Mammoth: Fossils, Myth, and History by Claudine Cohen.

The Call of Distant Mammoths: Why the Ice Age Mammals Disappeared by Peter Ward, Mammoth: The Resurrection of an Ice Age Giant by Richard Stone, Frozen Fauna of the Mammoth Steppe by R. Dale Guthrie, and Mammoths: Giants of the Ice Age by Adrian Lister & Paul Bahn. 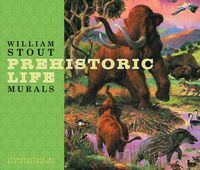 If you were lucky enough to grow up entralled by sabertooth-laden murals at your local natural history museum, you’ll love William Stout Prehistoric Life Murals, along with Mammoths and Mastodons: Titans of the Ice Age, a new volume from our Waterton Canyon Kids Nature Library, and recently strongly recommended in the pages of Natural History magazine.